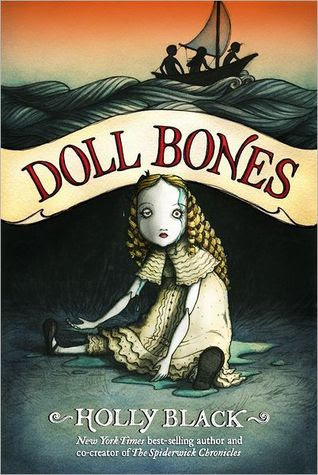 A few weeks ago I was contacted by Melissa Jensen, a Teacher-Librarian from Trillium Woods E.S. in Barrie, to see if I would accept some book reviews from her students, for my blog.  I think it's a great idea to hear from students, and today I welcome my first student guest blogger, Alyssia.

Here's what Alyssia had to say about "Doll Bones" by Holly Black:

"Zach, Poppy, and Alice have been best friends for as long as they can remember.  Every day after school they play this game where anything is possible.  There are warriors, pirates, thieves, evil mermaids, and one character that is the most important one of all…the Queen.  The Queen is played by a bone china doll that Poppy’s mom bought at a garage sale and is now kept in a cabinet for the rest of her days.  Until one day Zach is forced to stop playing the game and Poppy is haunted by the ghost that haunts the Queen’s body.  Will they do as the Queen pleases and go on a life changing quest to put her ghost to rest, or will they stop playing the game and lose their friendship forever?

Hi everybody I’m Alyssia and I’ve just finished Doll Bones.  It’s a great book that will fill you with suspense and make you want to read until the very end.  I love how the author Holly Black uses three kids around the age of 12-13 (perfect for intermediates) and uses their game full of mythical creatures, and brings it to life by making them play their game by going on a quest to help the Queen.  Intermediates would love this book because it has lots of adventure and it has a creepy side to it.  This is a great book with a creepy twist that will take you in its clutches and never let you go."