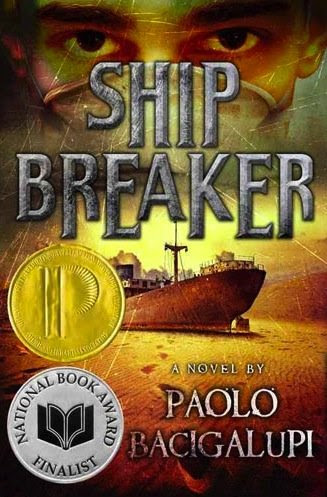 In a futuristic world, Nailer, a teenage boy works stripping grounded ships of copper wiring to make quota for his harsh employer .  His employer is his father, an abusive and unpredictable man.  But when he and his friend Pima come across a clipper ship beached during a recent hurricane, he must make a very important decision.  This ship could set him up for life.  If he and Pima strip the ship before anyone else finds it, they’ll be very rich.  But there’s a problem.  A very beautiful and wealthy girl (a swank) is trapped on the ship.  Should Nailer rescue her and face an uncertain future (possibly even a better future), or should he let her die and take what he can from the ship, securing his financial situation forever?

This is a fast-paced thriller set in a believable future, where oil is scarce and life is harsh.  Nailer is a very likeable character who works hard and believes in loyalty.  Although his mother is gone and he can’t count on his father, Nailer has some true friends . His co-worker Pima, and her mother Sadna have always been there for him, even taking him in at night when he needed to get away from his addict father.  I really cared about Nailer and his friends and couldn't wait to see what the outcome of his big decision would be.

I thoroughly enjoyed this novel.  Nailer lives in a dangerous world of drowned cities, where genetically engineered “half-men” are created to be loyal to their owners, and survival depends on so many unpredictable situations and who you know.   A National Book Award Finalist, and A Michael L. Printz Award Winner.   I highly recommend this for intermediate students.