Rust: A Visitor in the Field

Ever since his father left to fight in the war, Roman Taylor has had to work hard to keep the family farm going.  But things change when Jet Jones, a boy with a jet pack, crashes into their barn.  Where did he come from?   And why is there a giant machine chasing him?  Roman grabs his motorcycle and rescues Jet, but mostly it’s because he wants to harness the machine’s power.  If he can find the source of that power, he’ll be able to take care of the farm, without relying on his little brother (who needs to be in school), or Jet.  But the reason the machine exists in the first place, is a much more serious matter.

When this book arrived, I was drawn to its beautiful binding and sepia-toned illustration plate on the front cover.  The rust coloured cover and even the weight of the book in my hand just felt so perfect.  And the gorgeous illustrations on the end pages are the kind of details book-lovers appreciate.

The story starts out on a battlefield 48 years ago, where human soldiers face a giant clanky walking machine and mechanical soldiers.  After this prologue, the story takes us to the present, where we meet Roman Taylor and his family.  I loved so much about this graphic novel.  Besides the gorgeous cover and book design, the story itself raised a lot of questions about the machines, Jet’s purpose, where Roman’s dad is now, and the secret war fought with technology.  But hopefully I won’t have to wait long for the sequel.  This first book ends with a preview of the next volume Rust : Secrets of the Cell, which is due in May 2012.   The illustrations are stunning and I can’t believe this is Royden Lepp’s first graphic novel.  And hurray, he’s Canadian!  This is a great book for grades 7-9.

Order this book from Tinlids today

Posted by Anonymous at 11:23 AM No comments: 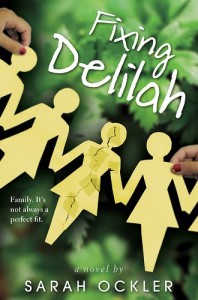 Delilah Hannaford seems to be in a slump. She used to be a good student, but lately she’s feeling out of sync with her life. Her boyfriend isn’t really a great choice. Her mother is a workaholic, and emotionally absent . When her grandmother dies, Del, her mom and her Aunt Rachel immediately travel to Red Ralls VT, her mom’s small hometown, a place they don’t talk about and haven’t been to for many years. Del wonders why her mother and her grandmother fought, after her other aunt (Aunt Stephanie) died. Why won’t her mother talk about it? Then she finds her Aunt Stephanie’s diary, and decides to keep it to herself. As she reads about her aunt’s relationships and secrets, and especially her depression, Del worries about the same thing happening to her.
When Del’s mother decides they need to stay for the entire summer, to get the house ready to sell, Del doesn’t know if she can handle it. But there are a couple of things that help Del cope; one of them is Rickie, the boy she used to play with during her childhood summers at her grandmother’s house. Now her feelings for Rickie have changed, and the attraction is mutual. But there seems to be another girl in his life and Del starts to feel that maybe she’s misinterpreted Patrick’s affection for her. Is Emma just his friend or something more? Del has lots of things to work out, and in the end she comes to a better understanding of her aunts and mother, and of herself. Del was a bit self-absorbed and whiny, but I think that’s typical for most teenage girls… especially when it comes to romance. I think this book will appeal to girls in grade 7-10.
Reviewed by Maria Martella.
Posted by Tinlids Inc. at 2:00 PM No comments:

Email ThisBlogThis!Share to TwitterShare to FacebookShare to Pinterest
Labels: review

Review: Because of Mr. Terupt by Rob Buyea 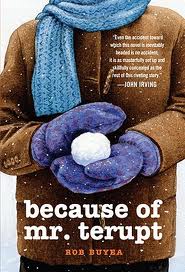 “It’s our bad luck to have teachers in this world, but since we’re stuck with them, the best we can do is hope to get a brand-new one instead of a mean old fart. New teachers don’t know the rules, so you can get away with things the old-timers would squash you for.” This opening line is spoken by Peter, the prankster of his grade five class. There’s also Jessica, the new girl, who always has a book in her hand; Luke, who loves school and gets all As; Alexia, the gossip and troublemaker who starts girl wars; Jeffrey, who hates school; Danielle who doesn’t know how to stand up for herself; and Anna , the outcast– no one ever goes to her house after school.


But when they do get a new teacher(Mr. Terupt), they soon realize he’s not your average rookie. At first they don’t know what to make of Mr. Terupt. He doesn’t let them get away with much, but he still makes the classroom a fun place to be. He has rules, but they seem much easier to follow. Each chapter is told from the point of view of one of the seven students. And then one day, an accident happens that changes everything.

This book really reminded me about some of the special teachers I’ve known in my life. What made Mr. Terupt so special? I love how he handled the students. He was respectful, even when he was disciplining. He knew how to empower the students so they could help themselves. He made learning fun. He even made math fun! He had a good sense of humour. We can’t know what happens each day before and after our students come to school, but it’s good to know that teachers like Mr. Terupt are there for them. We all know teachers like this. This book is great for grades 4-6, and will lead to some good discussions.