Thanks to my guest blogger Fatma Faraj for these two reviews.  Fatma is a teacher librarian at Royal Orchard Middle School in Brampton Ontario. 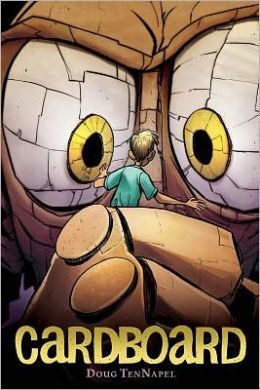 Summary:  Cam’s down-and-out father gives him a cardboard box for his birthday and he knows it’s the worst present ever.  To make the best of a bad situation, they bend the cardboard into a man- and to their astonishment, it comes magically to life.  But the neighbourhood jerk, Marcus, warps the powerful cardboard into his own evil creations that threaten to destroy them all.

Review: When opening a new graphic novel from Doug TenNapel, the reader knows they will be entering a weird and wondrous world.  And Mr. TenNapel does not disappoint.  Cam’s father is out of work and when on a job search, meets a salesman who sells him a piece of cardboard.  Now, that’s simply stating the facts.  The salesman is no ordinary salesman, and the cardboard is no ordinary piece of cardboard.  Just like the father in the movie Gremlins who buys Gizmo for his son as a gift, the cardboard comes with some rules:

#1- Return every scrap you do not use.
#2- You can’t ask for any more cardboard

The story has many themes running through it, such as: father-son relationships, bullying, loss of a parent, friendships, and power.  Depending on how the reader reads the text, there are many positive and negative examples of each to inspire conversation and question the choices the characters (and the author) make throughout the story.

The book has no age ratings; however, I would put this in junior and intermediate libraries.  There are moments of violence- one of the cardboard characters is a boxer- and weapons are created to fight the “bad” characters.   And there are moments that are scary as creatures come to life and fight to gain power.  If you are familiar with Ghostopolis and Bad Island, and have them in your library collection, CARDBOARD would fit right in, almost like a trilogy.

CARDBOARD is a fun read, with characters that are three-dimensional and believable.  There are moments when the reader is genuinely scared for Cam and his adventure; however, there is also a strong feeling that everything will all be okay.  It is a story that allows characters to learn from their flaws.  One might even compare this story to Pinocchio, where one wishes to be a real and better person one day. Summary:  Callie loves theatre.  And while she would totally try out for her middle school’s production of Moon over Mississippi, she can’t really sing.  Instead she’s the set designer for the drama department’s stage crew, and this year she’s determined to create a set worthy of Broadway on a middle-school budget.  But how can she, when she doesn’t know much about carpentry, ticket sales are down, and the crew members are having trouble working together?  Not to mention the onstage AND offstage drama that occurs once the actors are chosen.  And when two cute brothers enter the picture, things get even crazier!

Review: Raina Telgemeier’s graphic novel SMILE is one of the most popular books in my middle school library.  When I saw her new book was being published, I couldn’t wait to read it myself.  Is it as good as SMILE?  I don’t think so.  Did I like it?  Absolutely.  I was the student who loved the theatre and couldn’t sing so I joined the stage crew myself when I was a young student.  And Telgememeier gets it right when the drama backstage is just as exciting as the drama onstage.
DRAMA tells the story in the style of a musical production, instead of chapters, there are acts.  The characters in the story are typical middle school students with angst, talent, and romance.  Callie, the main character, works with her best friend behind the scenes, crushes on boys, and experiences many emotions throughout the story.

One of the most poignant moments is when Callie is talking to a boy and he tells her he’s gay.  It is very natural and true to the moment.  There are true moments of what a middle school student may go through in their two to three years at that age level, and this book captures many of those events in funny and endearing ways.

This book will be popular with middle school students (grades 6-8).  Can it be put in a junior school? I think so; however, I think that older students will appreciate and understand the themes in this book more so than younger students.  The themes can be considered mature considering there are themes of romance and relationships that may be new to some readers.

DRAMA is a fun read for students, especially the girls who are looking for graphic novels to read.  After reading, they will feel as if they have been to the theatre- seeing the antics that occur onstage and backstage at the show.