Review: Shannen and the Dream for a School by Janet Wilson 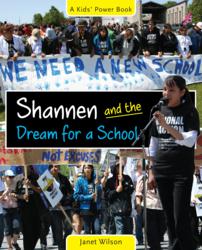 How can there still be children in Canada, who have to fight for a proper school, in the year 2011? This is the true story of Shannen Koostachin, and her friends who live in Attawapiskat, a Cree community on the coast of James Bay. Twenty years earlier, a fuel spill resulted in the closure of their school, forcing the children to attend schools in portables. The portables were so cold that the students often couldn’t take their mittens or jackets off, even in gym class. The government had promised to build a new school, but ten years later that promise was still unfulfilled.
Shannen Koostachin was a remarkable girl who decided to do something about this terrible injustice. She and her classmates decided to take a trip to Ottawa, where Shannen made a passionate speech to the politicians. She urged them to take care of First Nations children, not just in Attawapiskat, but in every community where children were attending a proper school. They made a YouTube video about their situation. And they received support from children who lived thousands of miles away.
This is another important title in the “A Kids’ Power Book” series, published by Second Story Press. It includes an epilogue, historical notes, timeline, glossary and a glossary of Cree words. “Shannen and the Dream for a School” is a moving and hopeful story about children making a difference. Like all the books in this series, after reading this story and seeing all the photos, I felt a strong connection with the children and their community.
In 2010 Shannen was killed in a car accident, so she never saw her dream of a new school come to fruition. She was 15 years old. Shannen believed that she and her friends could make a difference, and her dream continues today. This is a must-have book for every school library.
Reviewed by Maria Martella.
Posted by Tinlids Inc. at 4:20 PM No comments: 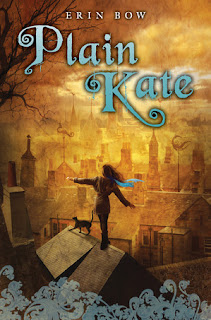 Plain Kate is the wood-carver’s daughter, and right from the beginning of this story, you know her life is going to be difficult. Her father dies, leaving her alone and even though Kate herself has an incredible talent as a wood-carver, the wood guild sends another carver to take over the shop. People in the village are dying from a mysterious sickness, and Kate is suspected of witchcraft, because her carvings reveal uncomfortable secrets about people. So off she goes, to find another place to live, with her cat Taggle, her only friend.

Then she meets Linay, a stranger who promises her he’ll grant her a wish if she gives him her shadow. She does so reluctantly, but it comes at a high price. Eventually she realizes that Linay has something to do with the sickness that is spreading from village to village, and she must try to stop him.

This book won the TD Canadian Children’s Literature Award for 2011, and I can see why. There is so much going on in this story – themes of courage, abandonment and belonging.  Although she has some flaws, Kate is not plain at all. Her determination, and true heart make her the perfect heroine. She really wants to find a place where she fits in, and gets close when she joins a group of Roamers, who see value in magic in her carvings. The Roamers are also despised people, and move around a lot. For the first time, she starts to feel like she’s part of a family. But the problem of being suspected of witchcraft follows her, and puts these new friends in danger. I love the dark mysterious characters, and the fears that Kate overcomes. And I especially love her cat Taggle, a funny sarcastic and arrogant cat who cares so much about Kate that he risks his own life to save her.

This is a great original story, and I hope to see more from this author. She has the magic touch.

Reviewed by Maria Martella.
Posted by Tinlids Inc. at 4:25 PM No comments: