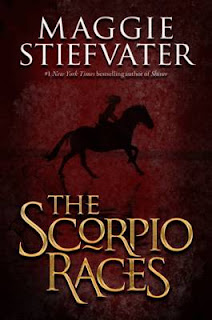 “It is the first day of November and so, today, someone will die.” Every year, at the start of November in a town called Thisby, riders race their water horses in the sand by the sea and cliffs. It’s a dangerous race because the water horses are not ordinary horses; they come from the sea, they are vicious, unpredictable and they have a taste for flesh.
Nineteen-year-old Sean Kendrick knows this only too well. He’s won the races three times, and is determined to win again. If he wins, he’ll be able to buy Corr, the water horse he is riding in the race. Sean works for a hard man named Malvern, who owns most of the water horses. Although he won’t admit it, he needs Sean to keep the water horses calm and safe. No one can handle the horses like Sean – he’s got a powerful and unusual gift – like a horse whisperer extraordinaire.Then there’s Kate Connolly, also known as Puck. There has never been a girl rider in this race, but even though the people in Thisby are against it, Puck is determined to compete and win. She needs to win to save her family home. And she intends to ride her own mare, Dove.
I have to be honest - I don’t know if I would have bothered reading this book if I just thought it was about a horse race. But it was highly recommended by my amazing friend and publisher rep Janet(who is always right on), and it’s written my Maggie Steifvater - two great reasons to try it.  And I wasn't disappointed!
The story is told from Sean and Puck’s point of view in alternating chapters. Sean was quiet and mystical. I felt like he came from the sea, just like the horses he loved so much. I loved Puck’s determination and how straight-forward she was. A romance develops between them, but it’s a quiet, gentle whisper kind of romance (not the helpless and nauseating kind). Both characters were strong , imperfect, and very likeable.
I was glad the author didn't just turn this into a romance. The characters were strong, but so was the setting - the sea, the cliffs, the cold harsh weather, and the danger of these powerful water horses who were almost impossible to ride.  I loved the mythical quality of this story.  It's so much more than a horse race! This story is about family, courage, and the sacrifice one makes for what they love and believe in. Beautifully written.
Order The Scorpio Races from www.tinlids.ca today.
Reviewed by Maria Martella.
Posted by Tinlids Inc. at 4:29 PM No comments:

The Electrician and Children's Books

One of the thousands of things I learned from my old boss Hy Sarick, (from my Children’s Book Store days), is that you should always replace your light bulbs as soon as they go out. For those of you who have been to Tinlids, you know that that’s not such an easy task. Our ceilings are about 50 feet high, and the lights are those long fluorescent tubes that don’t even fit in my car. But Hy Sarick said “if someone comes into your store and sees those burnt out lights, they’ll think they’re in a dump. “ In fact the first time he came to see my store, I saw him look up. And then he pointed. Up . At the burnt-out light. And shook his head. I of course made some excuse about not having a ladder high enough, but the damage was done.

This week I called my fabulous landlord who sent Giovanni the electrician, and his son ( I can’t remember his name). Anyway, Giovanni is quite the character and will talk to me (actually to anyone , I’m sure) about any topic you can think of. So today, while his son was high up on the ladder, Giovanni was in the Science section, looking at a book on butterflies. As I walked by, he turned to me and said “you know, these are children’s books, but look at me – I’m reading this and I’m still learning something. I know a lot about butterflies already, but it’s never too late to learn more. Did you know the tent caterpillar can be very destructive? I don’t kill them though. I don’t kill anything because I’m a gardener and I figure if God put the spiders there, and the bees , well that means they have a job to do… “ Then he told me about his neighbor who was always spraying chemicals on his lawn to keep it green. And chemicals on his plum tree to keep the worms away… and he went on about this for a bit and talked about nature getting even.

I could have listened to Giovanni all day. First of all, he has the same Italian accent my dad had, so I felt l was related to him….. and secondly, he seemed so taken by the books. He was also really really passionate about electricityand told me all about ballasts and how well made they were - “we replace some ballasts that are 40 years old. Do you know how solid these ballasts are? Feel the weight of this. There’s copper wire in there and lots of good material that we should be re-using. But they sell them to China because we don’t have a good environmental program to support the re-cylcling of this material…..” he was so animated in everything he talked about, from his stories of Italy, to the environment , healthy food, and the future of China.

Like many days, I'm reminded today of how books bring us together. Giovanni dreams of writing his stories down, and especially his invention ideas, that no one has thought of yet.  But he's too busy .   He said to me “you can learn everything I’m talking about , from all these books you’re selling. “ Like I didn’t know this already. But I just smiled and thanked him. Until, just as he was leaving, he stopped, looked up and said “but really, you should always replace your lights right away. Or else the customers will think this is a dump”. True story. Next time I’ll video tape him to prove it.

--Maria Martella
Posted by Tinlids Inc. at 4:39 PM No comments: