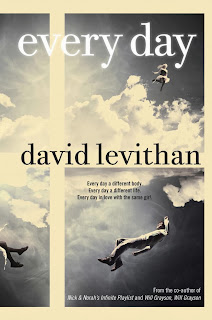 There’s never any warning about where it will be or who it will be. A has made peace with that, even established guidelines by which to live: Never get too attached. Avoid being noticed. Do not interfere.

It’s all fine until the morning that A wakes up in the body of Justin and meets Justin’s girlfriend, Rhiannon. From that moment, the rules by which A has been living no longer apply. Because finally A has found someone he wants to be with—day in, day out, day after day.

Every day, A has to figure out how far away he is from Rhiannon, and how he can get to see her.  And each time they meet, A is someone different.   He's the same inside, but his body can be female or male, fat or thin, healthy or unhealthy, light skin or dark skin.  He might be blind, speak Chinese or have to walk with crutches. The only thing he knows for sure is that he will always wake up in a body that is close to his age (16yrs).

Each chapter deals with A waking up in a different place, in a different body.  The first thing A does is access memories of the person's life.  Are they happy, sad, suicidal, angry, timid ? How do they feel about their family and friends?  What's going on in their life today, that he has to know about? Do they have a test at school,  do they have a boyfriend or girlfriend, do they have access to a car?    Because each chapter deals with a full day, I was very aware of the impermanence of A's life. Sometimes, when his "host body" was in a dysfunctional and unhappy family, it was a relief to know he would be leaving that house.  But other times, it was heartbreaking to know that A would never experience living with the same people for more than a day.   No one would know his past. In fact, A could only live with others in the present.  There was no one he could share the past or future with.  This was an unbearable fact, once he fell in love with Rhiannon.

I had so many questions after reading this book.  What do other people's lives teach you? If A could choose to actually live any of those people's lives, which one would he choose?  Could you really love someone who changes every day?  Sure, they might be the same on the inside - but is that really enough? What is it that you love about someone?  What kind of changes could you handle in someone that you love?  A never messed up the person's life.  He really respected what was going on for them, and wanted to leave the person's life the way he entered it.  How hard would it be to not interfere, especially if you thought it would help?

This is one of my favourite novels of 2012.  It's about selflessness, courage and heartbreak.  The ultimate love story! Gr 8+


order today from tinlids
Posted by Anonymous at 6:29 PM No comments:

The Raven Boys by Maggie Stiefvater

If you kiss your true love, he will die.  This is what Blue Sargant, daughter of the town psychic has been told all her life.  Blue is used to living with predictions, but things change when she meets Gansey, a privileged boy who attends the prestigious Aglionby Academy for Boys.  Gansey and his friends (known as the Raven boys, because of the Raven crest on their school uniforms) are on a quest find Glendower, a sleeping Welsh king.  Legend holds that whoever finds him will be granted a wish.

Although Blue doesn’t have the same psychic powers as her mother, she does have the ability to amplify the messages that come through for her family.  It’s for this reason that she annually accompanied her mother to an old churchyard on St. Mark’s Eve. where the soon-to-be-dead spirits would walk past.  Blue never sees the spirits herself – until this year, when a boy steps up to her and speaks.  He tells her his name is Gansey.

What does this mean?  When will Gansey die, and will it be Blue that causes his death?  Is he her true love?  Why is she so drawn to Gansey and his friends?  Blue has never really believed in true love and the repeated warning from her mother.  But now she isn’t so sure.

I can imagine this story being handled really poorly by a not-so-great writer.  Thankfully, Maggie Stiefvater has done a great job in presenting well-drawn characters, in this intriguing mystery. I love this story because the characters are all so different, and yet so vital.  Gansey is determined, has dignity, and really takes care of his friends.  Noah doesn’t say much, seems vulnerable and mostly observes.  Adam is the scholarship student who resents the wealth around him and doesn’t like handouts.  Ronan is the 'bad boy,' very cynical and angry.  And then there’s Blue, the quiet girl who lives with her psychic family – all women.  I think my favourite scenes were the ones that involved all these women and their predictions.  I loved the complexity of their personalities and the occasional conflicts between them.  They were strong, funny women, who I wanted to learn more about.

The other part of the story that kept me hooked, was the question of whether or not Gansey and Blue were destined to be together.  Was he really her true love?  Or was it one of the other boys?  Would she kiss him and therefore cause his death?  Why did she see him on the churchyard path on St. Mark’s Eve?  What was the importance of what he said to her on that road?  These were some of the questions that kept me intrigued.

Magic is something that should be treated with respect and integrity, and I feel this author did just that.  I loved being suspended in this world of unexpected friendships, love and impending doom!

order today from Tinlids
Posted by Anonymous at 1:12 PM No comments: